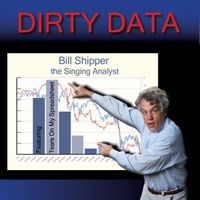 From the recording Dirty Data

Why Does Dark Matter?
Bill Shipper

Today I read an article about the smashing of a particle
I guess mystics and physicists are trying hard to co-exist
They’re spending 8 billion dollars on a colossal machine
Searching for some force too small to be seen
They’re looking for a teeny weeny gravitational glue,
Kinda like Star Wars meets Horton Hears a Who,
They call it Dark Matter. They call it Dark Matter.
While the poor go hungry and the rich get fatter,
You’re spending 8 billion to find Dark Matter.

Now did we ever have a choice? Was it something we could vote on?
Did Einstein need that much when he was looking for the photon?
What about the President? Didn’t he say that he’s the Decider.
Who said yes to this supercollider
And why does Dark Matter?
Why does Dark Matter?
You’re lost in the 12th dimension, mad as a hatter,
Spending that much money on find Dark Matter

Are you barking up the wrong tree with your super symmetry?
I’m still strung out on string theory, it’s too complex for me.
When you map the universe inside, outside and above,
Will your Theory of Everything have a place for love?
And why does Dark Matter?
Why does Dark Matter?
Now, are you trying to get to heaven on Hawking’s ladder?
And why the Hell does Dark Matter?

Now picture a Cern scientist, silly grin on his face,
Thinking he can understand the mysteries of space
Sipping half caf cappuccino, playing with the controls.
He doesn’t notice the neutralinos are turning into black holes.
Then something goes wrong, like he hits a button in a sneeze,
And Europe looks like 8 billion kilos of Swiss cheese,
All for Dark Matter
All for Dark Matter